Health Insurance in the time of COVID-19


By Lecia Parks Langston, Senior Economist
“Americans want jobs. They want affordable health insurance. They want an education.” John McCain
As the world hunkers down under the effects of a pandemic, the need for health insurance coverage becomes even more apparent than usual. Just how many Utahns are covered by health insurance? Who are the uninsured? Data just released by the U.S. Census Bureau (2018 Small Area Health Insurance Estimates (SAHIE)) provides enlightenment on healthcare coverage in the under-65-year-old population. Additional demographic information is available from the American Community Survey, rounding out our understanding of the insured and uninsured in Utah. 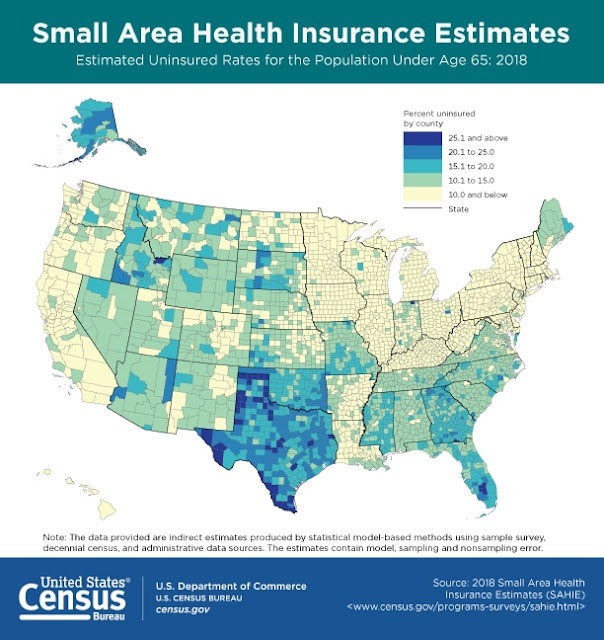 The SAHIE estimates cover the population under 65 years of age. Of course, virtually all citizens 65 and older are covered by government-provided Medicare benefits. Because these estimates date back to 2008, two years before the signing of the Affordable Care Act (ACA), they suggest the how the ACA has changed the health-insurance landscape in Utah.
Compared to other counties across the United States, Utah’s counties, for the most part, had mid-level to high levels of insured individuals in 2018 (the most recent data available). National regions of high coverage include northern eastern states and the west coast. Texas seems to have the highest uninsured levels with a vast number of counties experiencing uninsured rates of greater than 20%. Most Utah counties have uninsured shares below 15%.
In 2018, Morgan, Davis, Daggett and Emery counties showed the highest insured rates in Utah. In contrast, San Juan, Duchesne, Uintah, Piute and Garfield experienced the lowest rates of health insurance coverage.

That was then, this is now

The number and share of Utahns covered by health insurance have certainly improved in the past 10 years. In 2008, roughly 83.7% of the under-65 population was insured compared to about 89.6% in 2018, an increase of nearly 6 percentage points. In terms of individuals, that increase represents a gain of 427,000 insured Utahns.
However, coverage appears to have peaked in 2016 at 90.3% and has since retrenched. The repeal of ACA’s individual mandate and price increases, due to the elimination of cost-sharing reductions to payers selling individual plans, likely contributed to the recent slight decline in Utah coverage. However, the state’s Medicaid expansion, effective in 2020, should help bump up insured rates.

Highlights from the American Community Survey (2014-2018)

We welcome your comments! However, we do not post comments with "links" or those comments directing to your website. These will not be published. Thank you

County Pages - find economic and demographic profiles and publications for counties in Utah, including employment information, population, sales, and construction.

Wages and Occupational Openings Data (WOOD) - find wage information, projections data and links to other tools, for all Utah jobs at statewide and selected sub-state areas.

Utah Employment and Wages - search industry employment and wage data compiled by reports that are submitted by employers to the Utah UI program.

Publications - As part of a cooperative agreement with the Bureau of Labor Statistics, we provide the public with the data and analyses that we collect in a variety of mediums about the labor market in Utah.

Visit our main economic information page and find all of these tools and more.